PM of Georgia meets with the Ambassador of Turkey 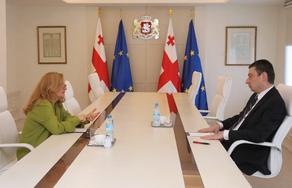 The Prime Minister of Georgia Giorgi Gakharia met with the Ambassador of the Republic of Turkey to Georgia Fatma Jeren Yazgan, the administration of the Government of Georgia shares the statement.

According to the agency, the conversation focused on the strategic partnership between Georgia and Turkey, recent developments in the region, and the further deepening of relations between the two strategic partners in various fields.

"Cooperation in the fight against the pandemic and Turkey's assistance to Georgia was emphasized. According to the Prime Minister, the defeat of the pandemic is possible only through joint efforts, and the support of friends and partners in this process is of great importance. The meeting focused on political and economic cooperation between the two countries, as well as the need for security and stability in the region. The Prime Minister and the Turkish Ambassador also discussed the next meeting of the Georgia-Turkey High-Level Strategic Cooperation Council, which got temporarily postponed due to the pandemic," the statement said.

Giorgi Gakharia thanked the diplomat for his efforts in developing the strategic partnership between the two countries and noted that Georgia especially appreciates Turkey's strong support for the country's territorial integrity and sovereignty.