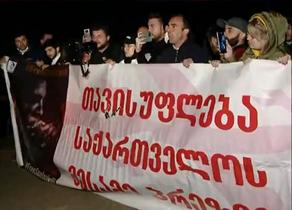 The police have not reportedly allowed protesters demanding ex-president Mikheil Saakashvili's release from jail and heading to Bidzina Ivanishvili's house to enter the Chorvilla village. The reason for doing so is, as they say, the attempt to avoid possible clashes between Ivanishvili's supporters gathered outside his house and the group of activists.

''We face extreme weirdness. The police have refused to let us into the village. We are peaceful protesters, the supporters of Saakashvili,'' an activist said.

He declared a hunger strike 21 days ago.