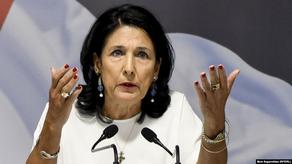 President Salome Zurabishvili announced a moratorium on pardoning prisoners and proposed a review of the pardon procedure.

“I address the public that worries and make me worry about my decisions. I want to say that pardoning is not what people think. Pardoning does not mean absolution. It is not a revision of any kind of court. This is the fourth force that stands above the court system. This is President’s subjective personal decision, it is rating  the given circumstances. That is why I have said and I repeat, that the pardon should be reviewed. There will be a new rule from January. I declare a moratorium on presidential pardoning, it is important for me "- the president stated at the briefing.

According to the President, a working group will be set up next week to work on new pardon rules. The issue has already been consulted with the Chairman of the Parliament.

“It was several time that I suggested that the rules on pardon be revised and worked out by a certain group in parliament. The Chairman of the Parliament has already been consulted about this. We have been working on new rules since January and my version will be handed over to Parliament. Next week there will be a meeting of this working group in which all parties will come together and formulate the best version of the rules to present to the public. "- the President of Georgia stated.

The President of Georgia pardoned 35 people on August 28, including those convicted of murdering police officer Tarash Mukbanian in 2014 and convicted in the murder of David Otkhmezuri in 2004.  It is reported that one of the pardoned is still in search since 2009.