President: Georgian police is on the way to Europe 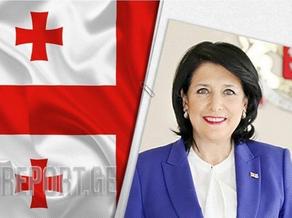 "A democratic, strong, and free state is formed only when the security of the citizens is ensured in the country, and their rights are protected," Salome Zurabishvili stated during her speech at the event dedicated to Police Day.

According to the President, the goal of Georgia is to establish a democratic and European state.

"The role of the police is great in achieving this goal. Thirty years have passed since the restoration of Georgia's independence. As one of the main supporting institutions of the state, the Georgian police have fully reflected the important developments in the country over the past three decades, the challenges facing the state, and the demands of society. Along with the Georgian state and society, the Georgian police also set out on the way to Europe. As a result of radical and large-scale reforms and the tireless work of each police officer, it has developed into a police force with modern and democratic standards," - said the President.

The President awarded the Medal of Honor to 3 policemen.