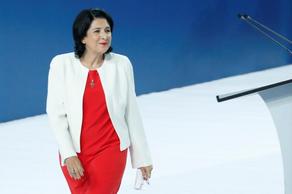 Georgian President Salome Zurabishvili has responded to the fact of the admission of clericals to David Gareji Monastery, adding that she praises the results of the Georgian PM’s and Azerbaijani President’s meeting.

As the President says the access to the David Gareji churches is another step forward in terms of the border problem solution.

‘Azerbaijan is our strategic partner and I believe the problem will be resolved,’ the statement by Salome Zurabishvili reads.

As a reminder, Georgian Prime Minister Giorgi Gakharia said at the government session today that the churches of David Gareji Monastery will be accessible to the Georgian clergymen starting October 11.