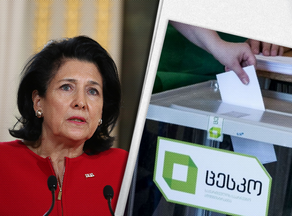 Georgian President Salome Zurabishvili has addressed the public prior to the 31 October parliamentary elections. In her public address, Zurabishvili says that the protection of people on whom the country's future rests and the organizations constitutes her responsibility.

The President also focuses her attention on the Georgian Armed Forces, law enforcement officers, and the healthcare system.

"Derogatory and discriminating statements on the entire army are unacceptable. They are inadmissible, especially in the country whose territories are occupied and which aspires to NATO. Similar baseless statements undermine the country's interests, aim at destabilization, and serve other's interests. As the supreme commander-in-chief of the Defense Forces, I strictly condemn and will always condemn similar attempts! I want to reaffirm my trust and respect for the Georgian Armed Forces!" the President declared.

Zurabishvili thinks that going to the polls is the best possible way to cope with all existing challenges and the only possible alternative. "This is each citizen's responsibility, mine or yours," she notes and congratulates all voters who cast their votes for the first time. "Go to vote on election day! Participate in peaceful and fair elections!" she says.