President Zurabishvili: I look forward to working with you 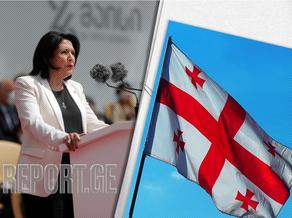 Georgian president Salome Zurabishvili has congratulated Olaf Scholz on his appointment to the post of chancellor of Germany.

''My most sincere congratulations and wishes of success to @OlafScholz as he takes over the responsibilities of Chancellor of Germany.

I look forward to working with you to make our ties stronger and to strengthen Georgia’s unwavering path on European integration,'' she tweeted.

''It’s been an honor to work with Angela Merkel during her years as Chancellor, years in which the Georgia-Germany ties grew exponentially.

Her role in strengthening Europe will be well remembered and I hope to see her continue inspiring the next generation of woman European leaders,'' Zurabishvili said in her other tweet.