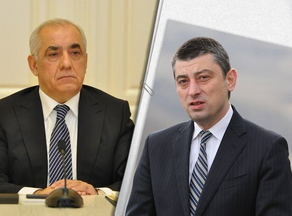 According to the Cabinet of Ministers of Azerbaijan, Asadov informed Gakharia about Armenia's military provocation against Azerbaijan, which started on September 27.

"The statement emphasized that one day after a ceasefire agreement, ten people, including five women, were killed, 34 civilians, including ten women and nine children, as a result of the SCUD missile system firing on apartment buildings in the center of Ganja at night.

It was noted that the Georgian Foreign Ministry's immediate response to Armenia's attempt to strike the Baku-Tbilisi-Ceyhan oil pipeline was commendable.