Procession of solidarity starts at the Republic Square 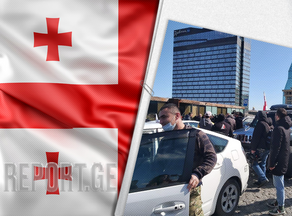 Members of the United National Movement, supporters, and civil activists gather at the Republic Square and prepare to start a rally of solidarity.

According to the protesters, Nika Melia is a political prisoner and is sitting in prison illegally, and the solidarity rally is taking place in his support.

"This is a rally of solidarity. By doing so, we express our support for Nika Melia, who is being held illegally and unjustly today as a personal prisoner of Gavrilov. Why was Nika Melia arrested ?! He was arrested because he refused to pay Gavrilov's tribute. He already paid bail for this case once, so no one argues that Nika Melia is an illegal prisoner, a political prisoner. Today we will leave this particular place and go to the prison in Rustavi where Nika Melia is being held," Giorgi Kapanadze said.