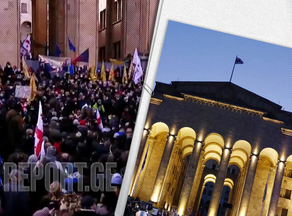 After the protest march, the demonstration outside the parliament has started with the national anthem.

Opposition members, their supporters, and civic activists began the march in different areas of the capital.

Opposition leaders are already making speeches. They plan to repeat their requirements, including Nika Melia's release, and publicize the action plan.