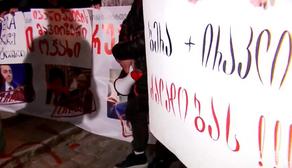 Protesters have gathered outside the office of the ruling Georgian Dream party.

They are protesting a newly-released audio recording of a phone talk between Bera Ivanishvili and Georgian PM Irakli Garibashvili.

They are holding banners that read "Bera is a cruel TikToker" and "Ivanishvili's mafia family."