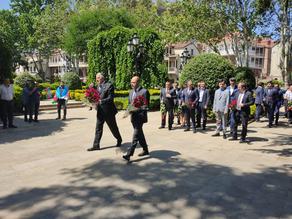 They also paid tribute to the Azerbaijani public figures' memory Hasan Bey Aghayev and Fatali Khan Khoyski and laid flowers at their graves.

Today, as part of the 102nd anniversary of the establishment of the Republic of Azerbaijan, Tbilisi Bridge of Peace will be lit in the colors of the Azerbaijani flag.

One hundred two years have passed since the establishment of the Azerbaijan Democratic Republic, the first democratic secular state in the Muslim East on May 28, 1918.

The Declaration of Independence was signed in Tbilisi. According to the document, Azerbaijan maintained friendly relations with neighboring countries. The Democratic Republic of Azerbaijan ensured equal rights for all - regardless of nationality, religion, class, and gender.

The founder of the Democratic Republic of Azerbaijan was Mammad Amin Rasulzade.

In 1991, after the collapse of the Soviet Union, Azerbaijan once again declared independence.