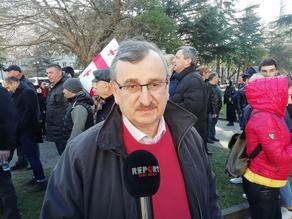 "One of the reasons for the rally in Kutaisi were the actions of Georgian Dream a few days ago. Our rally will be peaceful, " Roman Gotsiridze, a member of the National Movement stated in Kutaisi. According to him, protest was caused by Bidzina Ivanishvili's lie.

"Bidzina Ivanishvili deceived all of our partners in Georgia and abroad", Gotsiridze said.

Their demand remains unchanged, hold early proportional elections, to appoint a provisional government and form a new team at the Election Administration of Georgia.

The opposition plans to continue protests in other regions of the country and announced a large-scale rally in Tbilisi.