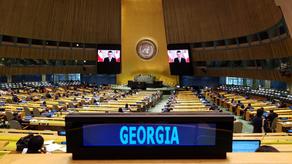 Today, when the entire world grapples with the coronavirus pandemic, the Russian Federation keeps carrying out illegal borderization and provocative activities in the occupied regions. It is actively employing hybrid war instruments, including the dissemination of misinformation against the key tool of the national infrastructure for combatting the pandemic, which is Richard Lugar Center for Public Health Research, Georgian PM Giorgi Gakharia declared at the 75th session on the UN General Assembly.

The Prime Minister stressed that in addition to the COVID-19 pandemic, Georgia has faced the other even more serious challenge, which is its territorial integrity, and he appealed to the world to have a proper response to Russia's illegal activities.

"It is universally known that Russia carried out an aggressive, large-scale attack against Georgia in 2008, which we managed to contain thanks to the support of the international community, the US and the EU. Here, in the UN headquarters, everyone knows perfectly well that 20% of Georgia's land, the integral regions of Abkhazia and Tskhinvali, is occupied by Russia," Giorgi Gakharia declared.

The PM also stressed that Russia has so far refused to comply with the Ceasefire Agreement of 12 August 2008, violated Georgia's sovereignty and territorial integrity and defied the fundamental norms and principles of international law. In his words, in addition to illegal military exercises, borderization, and barbed wires, citizens are paying a high price: they are suffering from the humanitarian crisis, cannot live in their own houses, cannot see their loved ones, are not entitled to the right of free movement, education, to the peaceful enjoyment of their possessions, and medical services.

"Locals are abducted, tortured, and murdered. I must remember our citizens Giga Otkhozoria, Archil Tatunashvili, and Davit Basharuli, who were deprived of the right to live. Georgia will never tolerate occupation! I call upon the International Community on behalf of each and every Georgian citizen to adequately respond to Russia's illegal actions and force it to comply with the norms of the international law and its obligations, including the 13 August agreement," Georgian PM stressed.