Russia may not have the final say in Georgia's decisions, according to US ambassador 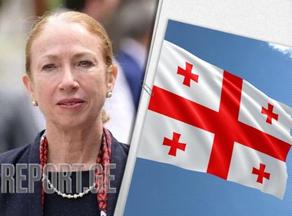 US Ambassador Kelly Degnan said in her address that Russia may not have the final say in Georgia's decisions, and they have no plans to get involved in Georgia-related decision-making without Georgia.

According to Degnan, the US respects all countries' sovereignty, including that of Ukraine and Georgia.

Degnan once again reaffirmed their unwavering support to Georgia's sovereignty and territorial integrity. The ambassador said that they, along with the part of the international community, keep urging Russia to stop the occupation of Georgia.

Degnan reiterated that they have remained committed to Bucharest's summit decision, saying that Georgia and Ukraine will join NATO after they meet the membership conditions.

In the US ambassador's words, Georgia has been subjected to Russian aggression and its disinformation campaign for years, and the Kremlin can offer nothing but fearmongering and oppression.

''The US has so far believed in united, free, and peaceful Europe, and we, together with our European partners, will keep working to make this a reality,'' Degnan declared.