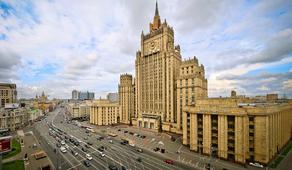 "I want to elaborate upon successful cooperation with Tbilisi thanks to which Russian citizens returned to their homeland. We are thankful to the Georgian side for helping three Russian citizens in the evacuation by letting them on board. Their contract came to an end, and regular flights between Russia and Nigeria were canceled. A consent by our Georgian colleagues to let the Russian citizens on board enabled them to reach Tbilisi from Lagos on 7 June. There, at the Embassy of Switzerland in Georgia, they were met by the representatives of Russia and were taken to the Georgia-Russia border to Zemo Larsi checkpoint. All of them have safely reached their permanent residence.

Our success in building this humanitarian cooperation despite the current complicated political situation is paramount. We are confident that by doing so, we have set a good example," Zakharova said, adding that Russia has also helped a Georgian citizen in Brazil, and similar cooperation should be witnessed between the two countries after the pandemic.