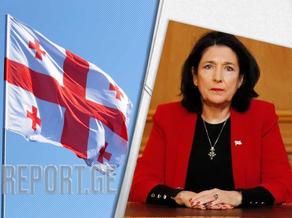 The ECHR ruling is a victory for Georgia," the president tweeted.