Salome Zurabishvili made a speech at the meeting under UN aegis 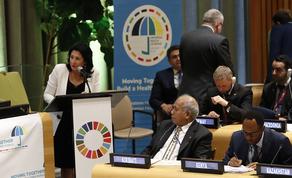 Georgian President Salome Zurabishvili has made a speech at the high level meeting of universal health coverage held under the auspices of the United Nations. As per Zurabishvili, Georgian Government has declared healthcare as its political priority and through mobilization of resources, necessary health protection services have been available to 90% of population.

“Do not leave anyone without care – this is our common objective,” stated the President.

The President talked about the successful projects by the Ministry of Health and focused on hepatitis C treatment programme.

“Another example of universal involvement is hepatitis C elimination programme by the Georgian Government implementation of which was started in 2015, with the help of the U.S. Center for Disease Control and Prevention Gilead Science, WTO and other partners.

For the purposes of participating in the 74th session of the UN General Assembly, the Georgian President has paid a working visit to New York.