Salome Zurabishvili: We want to create a platform for dialogue and stability 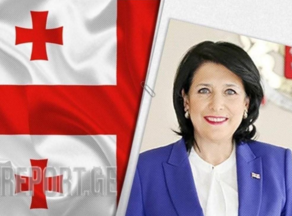 The President of Georgia, Salome Zurabishvili, in an interview with Agenzia Nova Srl, said that during her meeting with the Pope, she also spoke about the Nagorno-Karabakh conflict between Armenia and Azerbaijan.

"I talked to the Pope about another conflict in the region, the war in Nagorno-Karabakh between Armenia and Azerbaijan. For the first time in modern history, Georgia continued its traditions and was able to act as a mediator between the two countries. We hope that the situation will improve after the early elections in Armenia.

In the autumn of 2020, from the very beginning of the conflict, Georgia offered the authorities of both countries to visit Tbilisi and hold a dialogue forum between the parties, and we hope that we will play a positive role in the future.

It is important, for Georgia as well, that the two countries have good relations. If this conflict escalated, it would be another tragedy. We want to create a platform for dialogue and stability. This is a characteristic feature of Georgia, which promotes the coexistence of religious denominations and ethnic groups. Georgia has no other way to survive and develop. For his part, the Pope agreed with the situation in the region, and we are confident that these contacts will be very important in the future," Zurabishvili said.