Senator Risch on Ugulava's arrest: I am disappointed 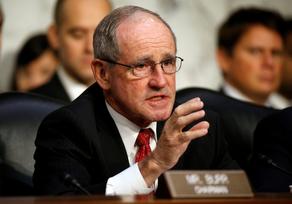 The United States Senator James Risch responds to the arrest of Gigi Ugulava, one of the leaders of European Georgia on Twitter.

"I am disappointed that Georgia decided to strengthen its politically motivated violence against the opposition. Last week, I told the Minister of Foreign Affairs of Georgia that the collapse of the independence of the judiciary and the persecution of the opposition was unacceptable," the statement reads.

The Supreme Court found Gigi Ugulava guilty. The Court sentenced the former Mayor of Tbilisi to three years in prison for embezzling funds.

I'm disappointed Georgia has chosen to increase its politically motivated abuse of opposition politicians. As I told the Georgian foreign minister last week, the collapse of judicial independence & persecution of the opposition is unacceptable behavior. https://t.co/jiY8cvdqXL