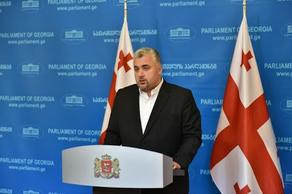 We have received the OSCE/ODIHR opinion, which reads that the model is in line with the international standards, Sergi Kapanadze, the leader of the European Georgia party declared after the publication of the opinion.

"The OSCE says that parties shall agree on any proposed model, and a consensus shall be reached. The OSCE has aired the statement by the opposition, which has urged the government to agree on a dialogue," Sergi Kapanadze declared, adding that the opinion does not indicate that their reform is unconstitutional. On the contrary, it underscores that the proposed model, which envisages multi-mandate majoritarian districts, may be defined as a majoritarian component of the electoral system. By doing so, according to Kapanadze, the opinion undermines the key argument of the Georgian Dream.

In Sergi Kapanadze's words, the OSCE opinion testifies to the fact that the proposed model may be submitted to the parliament.