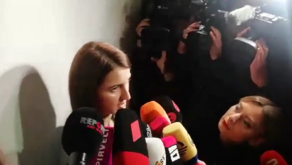 Londa Toloraia, the Head of the State Inspector Service, denies the information that investigator Mariam Choloiani was arrested only after the teenager's death.

"I cannot agree with this information, the police officer was at the station form 3 o'clock and was taking part in various investigative actions. Afterward, the decision was made. Any person whose actions show the signs of crime will be arrested," Toloraia stated.

The State Inspector confirmed reports that a friend of the deceased teenager was self-harming.

"I confirm the fact that a 15-year-old girl injured herself," admitted the State Inspector.

Londa Toloraia is holding a meeting with the Chairperson of the Human Rights Committee. Together with Sopio Kiladze, the meeting is attended by Rati Ionatamishvili, the Deputy Chairman of the Committee.