Strategic Partnership Council session to be held in Ankara 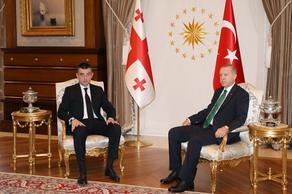 A Strategic Partnership Council session between Georgia and Turkey is set to be held in Ankara in the immediate future, with the corresponding agreement being made at the face-to-face meeting between Georgian PM Giorgi Gakharia and Turkish President Recep Tayyip Erdoğan.

A session of mixed commission for economic cooperation has also been decided to be conducted in November. The parties mentioned that this would contribute to deepening of trade and economic relations and using the existing potential in this respect.

The top officials have also discussed their cooperation in energy and logistics fields, including Baku-Tbilisi-Kars Railway Project and other joint projects in the fields of tourism and culture. They also particularly focused on ensuring safety of the Black sea regions.

At the meeting, President Erdoğan once again confirmed that Turkey supports Georgia's sovereignty and territorial integrity.