The act of protest at the Parliament has started - PHOTO 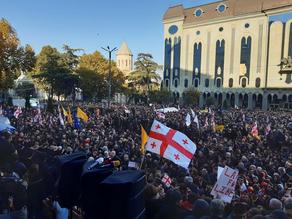 The opposition act of protest at the Parliament has started. The political parties and a part of the society protests against the reject of the constitutional changes, according to which the 2020 elections were to be implemented in the proportional system.

On November 14, immediately upon the completion of the plenary session, the citizens started to gather in Rustaveli avenue. Then they announced the meeting of today. The leaders of the opposition parties organized three meetings in these days. Today they are planning to present the protest demands to the society.

According to the preliminary information the opposition parties are demanding the early election in proportional system, the resignation of the government, the change of the Central Election Committee Administration and unconditional release of the political prisoners.

The citizens of different regions joined the act of protest in Tbilisi.