UN adopts Resolution on IDPs from Abkhazia and Tskhinvali

UN adopts Resolution on IDPs from Abkhazia and Tskhinvali 4 September, 2020  09:00 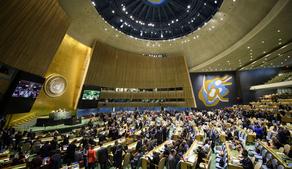 The General Assembly of the United Nations has adopted the Resolution on the Status of IDPs and Refugees from Abkhazia, Georgia, and Tskhinvali/South Ossetia, Georgia, initiated by Georgia and 54 countries, according to the Ministry of Foreign Affairs.

Per the body, the number of countries approving the Resolution has increased to 84.

"This is paramount especially in consideration of the concerning situation in the occupied territories of Georgia, where human rights are regularly violated, and in view of the absence of the international monitoring tools, with this constituting another predicament to a safe return of IDPs and refugees to their homeland," the statement by the MFA reads.

The resolution drafters also call upon those involved in the Geneva talks to marshal their efforts towards the improvement of the status quo in the breakaway regions of Georgia by ensuring residents' security and safeguarding fundamental human rights.