Under which condition will UNM head Nika Melia post bail? 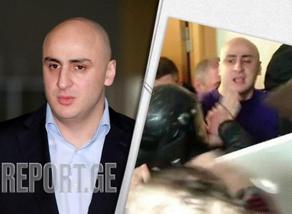 ''Scrap amnesty, and in this case, I will undertake the responsibility to post the bail by the European Union and leave prison,'' UNM head Nika Melia said in his social media post.

Nika Melia has asked oppositionists and representatives of the Georgian Dream to withdraw the 20 June Amnesty Project from the parliament.

In his statement, Mr. Melia calls upon his friends from opposition parties not to let police officers who cracked down on 20 June anti-occupation rally participants and the powers that be who ordered them to do so enjoy impunity.

In Mr. Melia's words, if the government applies amnesty to this situation, the reputation of the opposition and that of the entire country will be tarnished.

''Our unity is our sole advantage against the Georgian Dream coalition, which is why I urge you and the Georgian Dream party that signed the document to remove the issue of amnesty from the political agenda once and for all,'' the UNM head's social media post reads.