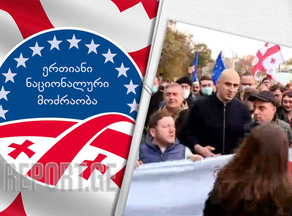 Representatives of the "National Movement" and their supporters are holding a protest march at the moment. They gathered at the Avlabari metro station at 14:00 and were marching towards the bank.

Within 2 hours, they plan to block roads on both shores of the capital.

The protesters are demanding the transfer of the third president of Georgia, Mikheil Saakashvili, to a civilian clinic and are chanting his name.

The chairperson of the National Movement, Nika Melia, addressed the gathered people near the Avlabari metro station before the march.

He called on the population to take part in daily protests and said that protests are now the most powerful weapon in the hands of the public.