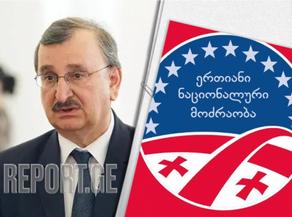 Roman Gorsiridze, a UNM leader, has responded to his party member Giorgi Baramidze's criticism by defining his appeal as unserious.

Two hundred years ago, this man used the term in the field of law implying the mass of people, and Gia Baramidze understood this directly failing to realize that mob here has a philosophical meaning rather than criminal," Gotsiridze declared.

Giorgi Baramidze, a leader of the UNM, called upon his party members Roman Gotsiridze and Salome Samadashvili to apologize to the activist who emptied a trash bin on Irakli Chavleishvili's head.

In Baramidze's words, Samadashvili and Gotsiridze made a terrible political mistake.

On Jan 23, a rally participant, Irakli Pangani, emptied a trash bin on deputy MP Irakli Chavleishvili after he had arrived at the rally.

Law enforcement officers detained the activist on Jan 24. He was later released from prison, as the prosecution required that he posted bail.