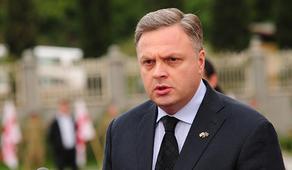 Giorgi Baramidze, a leader of the UNM, calls upon his party members Roman Gotsiridze and Salome Samadashvili, to apologize to the activist who emptied a trash bin on Irakli Chavleishvili's head.

In Baramidze's words, Samadashvili and Gotsiridze made a terrible political mistake.

Baramidze stressed that throwing garbage at others is not a method of the UNM.

"Irakli Chavleishvili was a man who fought together with these ardent opponents of the government and its regime. He promised not to enter that Supreme Council. However, he later changed his mind, broke his promise, and started to insult these young people. Berating your supporters who stand there day and night in this freezing cold is a disgraceful behavior," he said and reiterated that an apology is mandatory.

UNM members Roma Gorsiridze and Salome Samadashvili have made harsh statements on the Batumi incident.

On Jan 23, a rally participant, Irakli Pangani, emptied a bag of trash on deputy MP Irakli Chavleishvili after he had arrived at the rally.

Law enforcement officers detained the activist on Jan 24. Today he was released from prison, as the prosecution required that he posted bail.