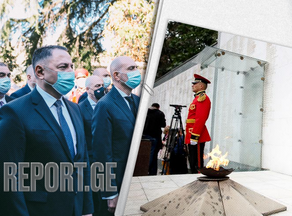 The Minister of Internal Affairs Vakhtang Gomelauri, the Prime Minister and members of the government, with the Head of the State Security Service, paid tribute to the memory of the heroes killed in the struggle for the unity of Georgia on the Heroes' Square and laid a wreath at the memorial.

Twenty-eight years have passed since the fall of Sokhumi. The military confrontation in Abkhazia began on August 14, 1992. The battle for Sokhumi ended on September 27, 1993, with the fall of the city.