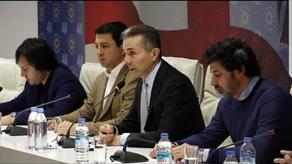 Press service of Georgian Dream-Democratic Georgia spreads the video materials of the parliamentary majority meeting. The meeting attended by the Political Council members was chaired by Bidzina Ivanishvili.

The meeting was accompanied by the act of protest.