Volski: We cannot define this particular offense as a systematic fault

Volski: We cannot define this particular offense as a systematic fault 7 January, 2020  22:06 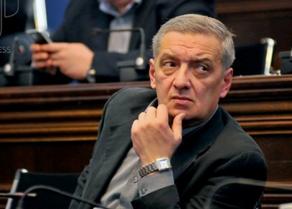 "We cannot define this particular offense as a systematic fault," Deputy Chairman Gia Volski said in his statement on a special forces team member charged with a murder of a 24-year-old man.

The Tbilisi City Court sentenced the special forces team member, Zurab Popkhadze, who was detained over the murder of Murad Tsurtsumia, 24, to imprisonment. The offender has served at the Interior Ministry. He has pleaded guilty.

Zurab Popkhadze has been charged under Part 2 of Article 117 and part 1 of Article 126 of the Criminal Code of Georgia, envisaging crimes of subjecting a victim to physical or other type of violence, resulting in physical suffering, severe deterioration of health and subsequent death.