'We are 'insane' when it comes to grandiose events': Saakashvili 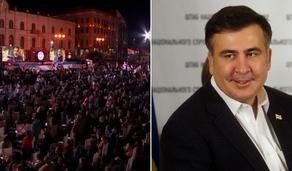 The third president of Georgia and leftists' PM candidate Mikheil Saakashvili has addressed his adherents at Freedom Square from Ukraine.

"They have dubbed me insane. Yes, we are 'insane' when it comes to grandiose events, and when it comes to our victory. I assure you everything will go well. Ivanishvili used to segregate us, but we will emerge united. I want to tell Dream supporters, let's take each other's hands; today we are opponents, but we remain children of the same land," he declared.

Saakashvili also called upon citizens to go to the polls. "Let Ivanishvili and his team retire quietly to continue rapid development," he said.

A demonstration led by the United Opposition - Strength in Unity has been held at Freedom Square.