"We have agreed to improve the Substantial Nato-Georgia Package" 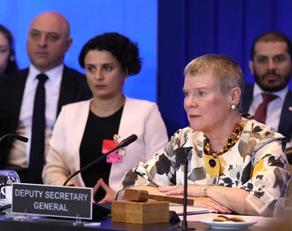 “We welcome substantial progress by Georgia: you have managed to implement defence reforms and modernize armed forces, and you have made significant progress in monitoring military expenditure. We appeal to you to continue following this path,” declared Rose Gottemoeller.

According to Mr. Gottemoeller, visit of the representatives of The North Atlantic Council to Georgia is a testimony to strong and developing NATO-Georgia partnership.

“You are one of the chief contributors to our missions in Afghanistan, with this enabling us to combat terrorists and create conditions for establishing peace in Afghanistan. We congratulate on the representative of Georgia holding the position of Deputy Chief of Staff; this is the highest title within the NATO-led operations in Afghanistan awarded to the Georgian officer in the NATO missions, and we appreciate your leadership” announced NATO Deputy Secretary General Rose Gottemoeller.