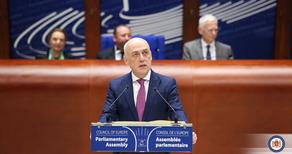 In the framework of the Munich Security Conference, the Georgian Foreign Minister David Zalkaliani, together with the NATO Deputy General Secretary and colleague Ministers participated in the panel dedicated to the Black Sea region.

According to Zalkaliani, the Black Sea region has always been the region of the social and economic interests of many actors. The tendency is increasing in line with the interconnection of the countries.

The Russian aggression directed against Georgian and Ukraine has dramatically changed the political and security balances of the Black Sea region and created a long-range risk for the European stability and security. Zalkaliani believes that NATO involvement in the Black Sea region security will contribute to stability strengthening; hence Georgia is to continue close cooperation with the organization.

According to the Minister, cooperation with NATO in other operations ensures the security of the country. Thus, the participation of Georgia in the Afghan mission proves that Georgia is the most reliable and skilled partner.

David Zalkaliani says that Georgia and Ukraine are important allies for the NATO and that it is essential that both countries are actively involved in the Black Sea security strengthening process.

The Georgian Foreign Minister is participating in the 56th Munich International Security Conference held in Germany on February 14-15.