Zalkaliani left for London within framework of NATO leaders meeting 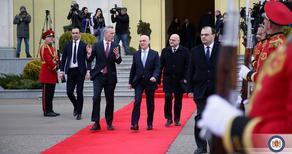 David Zalkaliani, the Minister of Foreign Affairs of Georgia will pay a visit to London on December 3-4, within the framework of the NATO leaders' meeting, where he will take part in a NATO Engages: Innovating the Alliance event.

David Zalkaliani will attend the dinner of the Foreign Ministers of NATO member states.

During his visit the Minister of Foreign Affairs of Georgia will hold a meeting with Christopher Pincher, Minister of State for Europe and the Americas.