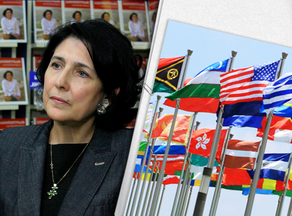 Another fake news about Georgia and its strategic partners, the USA and EU, has been disseminated by Russian media outlets, Georgian President Salome Zurabishvili said.

In the President's words, "Gosnovosti" posted the article titled Georgia Enjoys Benefits by Provoking Russia. The author of the article writes about the fabricated letter that was allegedly sent to Zurabishvili by Vice-President for Protecting European Way of Life, Margaritis Schinas.

"In the fake letter, Mr. Schinas thanks the Georgian President for supporting the initiative to create a camp for refugees from the Middle East in the territory of Georgia.

The Russian side's another attempt to discredit the Georgian government and its relationship with its international partners at the international level is alarming.

By disseminating misinformation, the Russian side also causes the public trust in the government to fall, sparks anti-western sentiments in the public, and fear of nonexistent danger from allies and friends.