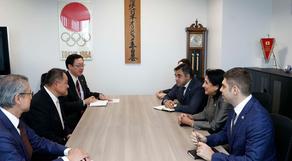 Within the framework of working visit to Japan the President of Georgia met with Yasuhiro Yamashita, the President of Japanese Olympic Committee. During the meeting two leaders discussed the Olympic and Paralympic Games scheduled for 2020 in Tokyo, as well as the relations between Georgia and Japan.

According to Yasuhiro Yamashita the Olympic Committee will do its best to enable Georgian athletes to achieve the best they can in the Olympic Games in 2020.

the President of Japanese Olympic Committee talked about preparation process for 2020 Olympic Games and shared with the information about new Olympic Stadium with Salome Zurabishvili.