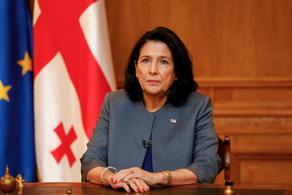 According to the President's Press Office, the Georgian high executive discussed the significance of this issue as early as in the previous year at the meeting with her Azerbaijani counterpart in Baku. The presidents agreed on the importance of the timely completion of the process.

Salome Zurabishvili is now confident that nobody and nothing on earth can hinder this process any longer.

In Salome Zurabishvili's words, Georgia is ready to serve as a platform promoting peace and stability in the region in the event that the sides agree on this.

The Georgian and Azerbaijani sides also focused on the issue of deepening the existing political, economic, trade, and cultural relations, as well as relations between Georgians and Azerbaijanis. Additionally, they stressed that Georgia and Azerbaijan are allies and strategic partners.

The Georgian president has invited her Azerbaijani colleague and the vice president to Georgia.