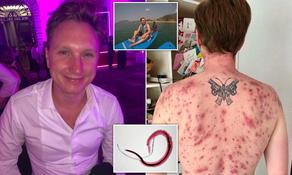 According to the Sun newspaper,  BRIT nearly died after a parasite crawled up his penis and started laying eggs after he went for a swim in Lake Malawi in South East Africa during a "holiday of a lifetime" with pals.

The 32-year-old had visited Africa with three friends in August 2017. They travelled from Zambia to Zimbabwe before visiting Malawi for five days.

The group swam and canoed every day on Lake Malawi, before flying back to the UK.

It was back in England that James' nightmare began.

In October last year he started to notice a loss of feeling in both his legs - but initially put that down to fatigue from cycling.

But he checked himself into hospital when basic tasks like climbing the stairs to his flat became exhausting.

James was given antibiotics and sent home but, a week later, he felt even worse and so returned to Chelsea and Westminster Hospital.

He said: "I explained to them that something serious was going on.

"I went to the neurology department and they did blood tests to see what was up. They determined quite quickly that my immune system was attacking my spine, leading to the loss of control of my legs.

"I was put on a six-month course of steroids to counter this...but they didn't actually know what had caused this."

Doctors from the Hospital for Tropical Diseases eventually told James a parasitic worm laid eggs in his body.

A week before Christmas he was diagnosed with schistosomiasis, an infection that's caused by a parasitic worm that lives in fresh water in tropical regions. It's most commonly found throughout Africa.

Once in the body, the worms move through the blood to areas such as the liver and bowel. After a few weeks, they start to lay eggs.

Some eggs remain inside the body and are attacked by the immune system. If it's left untreated it could have severe consequences.

James was proscribed medication called praziquantel that kills the worms.