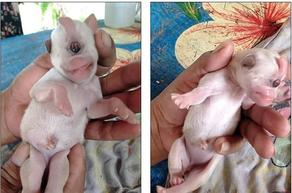 In Thailand, a newborn puppy has been hailed a "real-life cyclops" after being born with only one eye, placed in the centre of his head.

The pup, who has been named Kevin after the Minions character of the same name, was born in Central Thailand and was one of two pups. Owners, Somjai Phummaman, 45, and his wife Amphan, 49, posted footage of the rare pooch online. The footage showed the unique puppy spending time with his mother and brother.

He is currently being bottle-fed by his owners, and is said to be fit and healthy.

The unique pup may only have one eye, but that is not his only abnormal feature.

He also has extremely large lips, and an unusual piece of skin on his forehead.

Owner, Somjai, said residents have been visiting them to take a peek at the fascinating mutation.