Remains of a four-legged whale found in Egypt 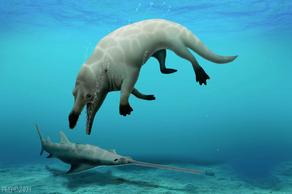 Scientists have discovered the fossil of a four-legged whale in Egypt, Reuters reports.

According to the publication, scientists have named a new species, Phiomicetus Anubis, which means god of death (Anubis).

Phiomicetus Anubis is a four-legged whale previously unknown to science. It lived 43 million years ago, both on land and in water.

Scientists estimate that it could easily eat crocodiles and small mammals.