Researchers discover bones of pirates on sunken ship in 1717 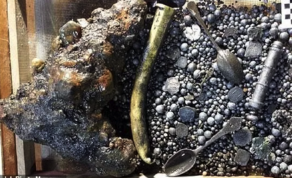 The skeletons of at least six pirates were found in the wreckage of a ship that sank off at the coast of Cape Cod.

The remains are believed to have been found at the site of the sinking of Whydah, which suffered a catastrophe in 1717 near the town of Wellfield.

Researchers at the Whydah Pirate Museum say the bones were found in several large concretions and fortified minerals.

The remains are being excavated by a team of archaeologists led by underwater researcher Barry Clifford. It was he who discovered Whydah in 1984.

"We hope that modern technology will help us identify these pirates and then find their descendants," Clifford said.