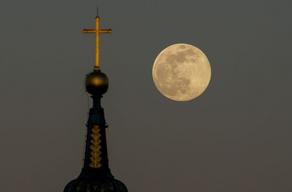 Last night the biggest supermoon of the year appeared in the sky. The full moon coincided with the moon's closest location to Earth, making it appear much larger in size. The supermoon appeared at 06:35 Georgian time.

The supermoon that appeared last night is also referred to as Pink Moon. The name, of course, does not mean that the moon will change color, but it was given this name in honor of the spring season.

It was possible to see the moon in good weather from anywhere on Earth.