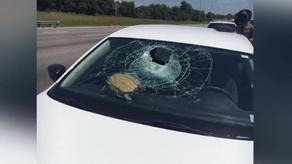 A turtle crashed into the windshield of one of the cars in Florida, injuring a retired woman, Mirror reports.

The injured and her daughter, who was driving the car, were shocked because they could not understand how the turtle appeared on the road.

It was suggested that the turtle found itself in the air due to a collision with another car.

The pensioner was taken to the hospital. Her life is not in danger.

The turtle was not injured in the incident; it only had a few minor scratches. It was later released into the woods.