Two passengers from Bologna-Kutaisi flight taken for the test 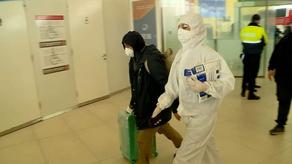 Bologna-Kutaisi flight two passengers are sent for tests. They were placed in a specially equipped automobile.

According to the ambulance doctor, one of the persons is a military man, who stayed in Bologna risk zone. Based on the person, he had no high temperature. No recommendations were received with his regards. Other military men took him to Gori.

As for the other person who arrived from Bologna, his temperature was 37.5, and he was placed in Kutaisi hospital for his safety.

No other cases detected on this flight. Doctors check all patients and record the data.

A total, 97 persons arrived with this flight.