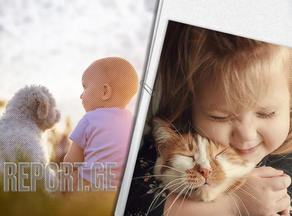 Unfortunately, there are cases when we encounter cruel treatment of animals by children. On this issue, child psychologist Natia Akhobadze, especially for the Facebook group "Pet-Pet" prepared very interesting information and recommendations for parents. Natia is a member of the team of "Your Psychologist-Coach".

"The greatness and moral progress of a nation is determined by its attitude towards animals," - said Mahatma Gandhi. Pythagoras believed that whoever kills an animal quietly and unhurriedly, it will not be difficult for him to kill a human being ... These two quotes clearly reflect the question of how the child's attitude towards animals affects his real life.

Let us ask the question: can child cruelty to animals be considered the norm? The answer is no. This is a behavior that definitely needs attention from parents.

What could be the reason for such a child's attitude towards animals and what is behind it?

1. It can be just a child's curiosity, a kind of experimental behavior, and this is normal at the age of 1-6. A small child does not understand that his favorite animal is not a toy.

2. A child's extreme attitude towards animals can occur when he sees all this from his own parents. In that case, no matter what the parent tells the child, he or she will still do what he or she sees.

3. The reason for this is often when a child is physically punished at home. It becomes a normative behavior for him or her, or he may do so to rid himself of the negative emotions accumulated as a result of punishment with creatures much weaker than him.

4. A child may mistreat an animal when such behavior is encouraged by adults and it is normal for them to do so. Children are not born cruel and aggressive. It depends on the parents whether they will become cruel. A person who is surrounded by care and love cannot be cruel.

What should we do if a child's behavior is cruel?

1. If the child is small and does so to satisfy curiosity, then the parent should satisfy the child's curiosity in other ways - to draw the animal and explain what organs it has in the abdomen, skull or drawings to do the same. The parent should tell him that he is as much a living being as we are and he is in pain, he also has feelings, he is afraid ... and give the child's behavior the appropriate direction.

2. A parent should set an example for his child by his behavior - caring for and loving animals.

3. The parent should exclude corporal punishment and disrespectful treatment of the child. This will allow them to treat others, including animals, with care and respect.

4. If a child encounters a similar scene outside home, explain that this is not normal, take the initiative and get involved in the process.

In my practice, there have been cases where a parent has approached me with a similar problem and I had to refer them to a child psychiatrist. When this problem is mild, parents usually do not pay attention to it and therefore do not consult a specialist. I want to clarify what is the connection between such behavior in childhood and the formation of the future personality.

Studies have shown that in more than 60% of cases of serial killers, sexual and other behavioral disorders, animal cruelty was reported in childhood. So this is an issue that definitely needs attention, reflection and intervention!