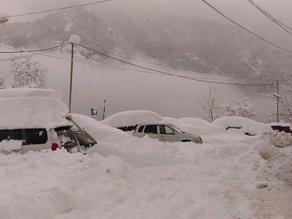 Snow depth has reportedly reached two meters in the mountainous Mukhura village. Snow blocked the road to the village, and snow removal operations were underway there. The road proved possible to clear from the snow at the end of the day.

Traffic movement has been restored on the Mukhara-Tkhibuli highway, but citizens are warned against moving on the road because of inclement weather.