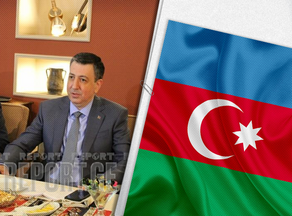 The Ambassador Extraordinary and Plenipotentiary of the Republic of Azerbaijan to Georgia Faig Guliyev met with the population of Khojaly living in Marneuli. The memory of the victims of the Khojaly genocide was honored with a minute of silence.

Zarifa Bayramova, an eyewitness to the Khojaly genocide, recalled her memories of the Armenian Armed Forces' inhuman treatment. She pointed out that the evil committed could not be expressed in words.

Khojaly resident Agnet Childirli spoke about the events in Aghdam, which he witnessed 29 years ago.

According to them, by liberating the occupied territories, they were paid back in the name of the sacrificed victims. They expressed a desire to visit the liberated territories in Azerbaijan.

The participants of the meeting thanked the Embassy of Azerbaijan for the attention.

Faig Guliyev noted that it is planned to publish the memoirs of Khojali residents living in Georgia. The ambassador called on the youth to take an active part in informing the international community of the truth about the Khojaly genocide.

Before the event, five families from Khojaly were provided with food aid.

The meeting was attended by Marneuli Deputy Mayor Kanan Omarov, Assistant Mayor Adil Aliyev, and Chairperson of the Board of the Azerbaijani Business Association, Georgia Nariman Gurbanov.