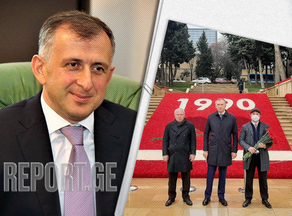 On the occasion of the 31st anniversary of January 20, 1990, the Ambassador of Georgia to Azerbaijan Zurab Pataridze and the staff of the Embassy paid tribute to the heroes dedicated to the freedom of the country and laid flowers at their memorial.

"Just like April 9, 1989, the tragedy in the Georgian capital, on January 20, 1990, in Baku, the former USSR military opened fire and severely punished civilians demanding freedom, independence, and territorial integrity. The bloody operation killed 133 people and injured 744 civilians," the Georgian Embassy said in a statement.

Today, the Azerbaijani people are mourning their compatriots who died on January 20, 1990.